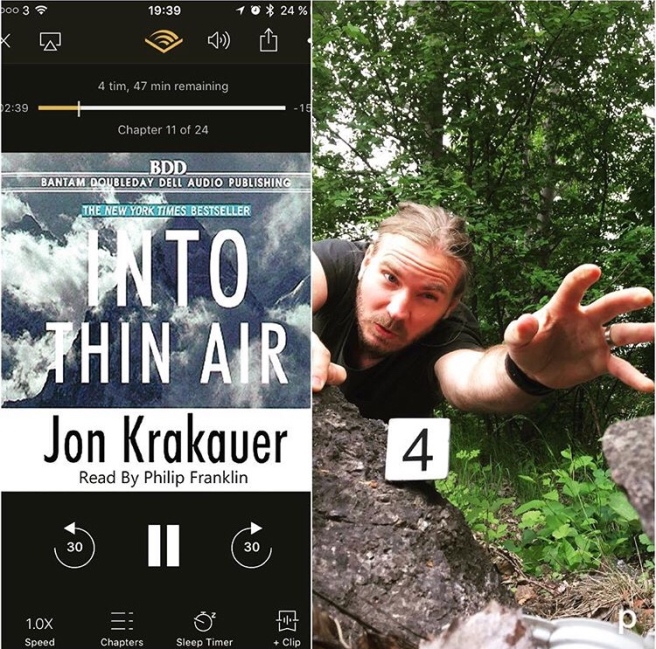 “Into Thin Air” is Jon Krakauers gripping first hand account of the May 1996 Mt. Everest disaster. Standing on the top of the worlds highest mountain he couldn’t see any signs of a deadly storm coming in. But he was wrong. When the group arrived at base camp, the mountain had claimed 5 lives and left the ones surviving in a guilt-ridden state.

“People who don’t climb mountains, the great majority of human kind that is to say, tend to assume that the sport is a reckless Dionysian pursuit of ever escalating thrills. But the notion that climbers are barely adrenaline junkies is a fallacy. At least in the case of Everest. …The ratio of misery to pleasure was greater by an order of magnitude than any other mountain I’ve been on. I quickly came to understand that climbing Everest was primarily about enduring pain.”

It’s a really good and my first one the topic of mountaineering. One thing that stuck with me was the climbers anti-climactic feeling of reaching the peak. There is no beer and BBQ being served at the top of the world. No warming tea and campfires to comfort you while enjoying the view. And that’s because, you know, people need air! Instead it’s just a few painful minutes of snapping photos before you have make the climb down again, realizing you are only halfway to the finish line.

📝 Sherpa people are an ethnic group living in the Himalayas. They are fantastic mountaineers and are frequently used to support expeditions to Everest because of their ability to endure high altitudes.

📝 For mountaineering purist the only “real” Everest climbs are done without bottled oxygen.

📝 There is a movie based on this book called “Everest”. I didn’t know it was base on this book and now I’m excited to see it!

Maybe it’s because stepping out of society and into the wilderness is more enticing to me, than ascending a cold mountain, but I like “Into the wild” a lot more than this book. Situations where one cannot breath just isn’t for me.

What is your favorite books about endurance?

#5 “Into the Wild” by Jon Krakauer

Christopher McCandles was found dead in an abandoned bus in the Alaskan wilderness in 1992. He had left society and family behind, burned his money (literary) and set off on a journey to find the true essence of life, far away from job security, conformity and a monotonous middle class existence.

It’s a incredible story that stays with you long after you turned the last page.

Apart from forcing me to ask myself a lot of questions about how life ought to be lived, it also introduced me to the author Jon Krakauer. I have now started my third book by him, “Under the Banner of Heaven”, and earlier this year I read his Everest-book “Into Thin Air”. Good stuff!

Have you read any Krakauer books?