This was the right book at the wrong time for me. I can see myself loving it 10 years ago, when I was had a more gloomy and cynical outlook on life, I can hear myself saying, “This book really gets it”. (It don’t miss those days. 😂)

While I can still see the qualities; the complexity, the prose etc.., I just don’t connnect fully with the existential crisis of the middle aged misanthrope, Haller, around which the story revolves.

Part of me wanted to go up to him and shake some life into the man. “Wake up, go dance! Have a laugh for Christ sake!” And well.. thats just what the characters around him tried to do, whether it was Mozart and Goete (we are dealing with a mix of fictive and historical character in true Hesse fashion..) or Hellers object of desire, a girl named Hermine (his anima?!).

📝 “For what I always hated and detested and cursed above all things was this contentment, this healthiness and comfort, this carefully preserved optimism of the middle classes, this fat and prosperous brood of mediocrity.” This reminds me of McCandless notion from ‘Into The Wild.

I love me some Hesse— Siddhartha and Damien being two of my favorite novels of all time—but I didn’t fully resonate with Steppenwolf. It’s a solid classic nevertheless!

We need to laugh more! Have you ever gauged how many times you laugh out loud each day?

Which is your favorite Hermann Hesse novels?

Check out my Reading Lists for more great books! 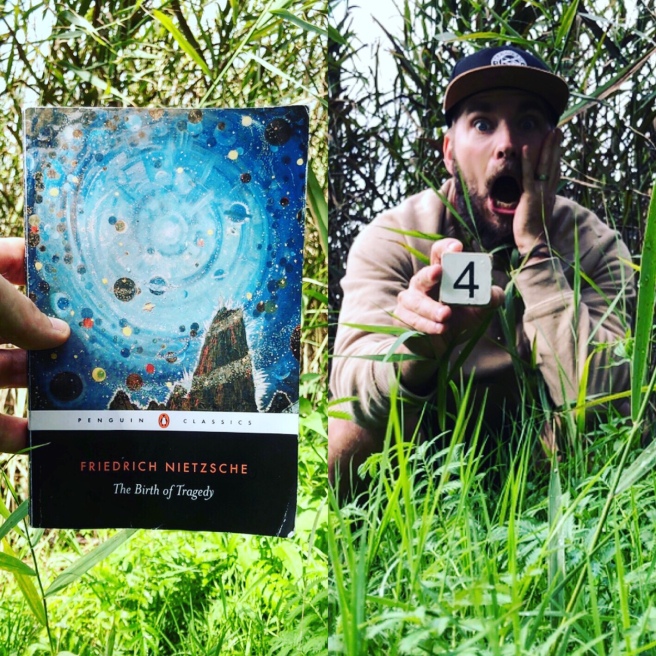 A Birth of Tragedy in 7 Steps:

▪️Nietzsche is 24 y/o when he become professor in philology.

▪️In 1872 he writes his first great book on dramatic theory; The Birth of Tragedy.

▪️He found an art form in the classic Athenian Tragedy that transcended the nihilism and horror of a meaningless world.

▪️What he found was an opposition between Dionysian and Apollonian forces; Chaos, Intoxication, Music vs. Order, Self-control and Sculpture.

▪️The Tragedy balanced these forces and allowed the spectator to experience in fullness the human condition.

◾️The end of Tragedy came with Socrates, through Euripides, Who Nietzsche thought ruined the Dionysian/Apollonian balance in Tragedy with reason and logic.

◾️ Nietzsche found new hope in Wagners music as a way to re-establish the balance between the Dionysian and Apollonian in modern art; a possible rebirth of tragedy.

📝 Beautiful works of art compensates for the horror of existence.

📝 Aectestic Arrest: Freedom from the Will in experiencing a great work of art. The only time except Nirvana or Samadhi where man can be free from the Will. (Schopenhauer)

📝 Is dancing and shouting in a drunken madness to “Killing in the name of” a form of modern Dionysiac phenomena? 🧐🤔

I’ve gotten through a book that is ‘out of my league’ and came out on the other side with new-found confidence in my ability to read philosophy straight from the sources.

I got a lot value from this book, both as an introduction to Nietzsche, and to the concept Dionysian/Apollonian opposition. But If you’re unsure if you could stand 129 pages of analysis of Ancient Greek theatre and art theory then you think you should pass on this one.

Share some philosophy book recommendations on the comments! ‼️

Check out my Reading Lists for more amazing books! 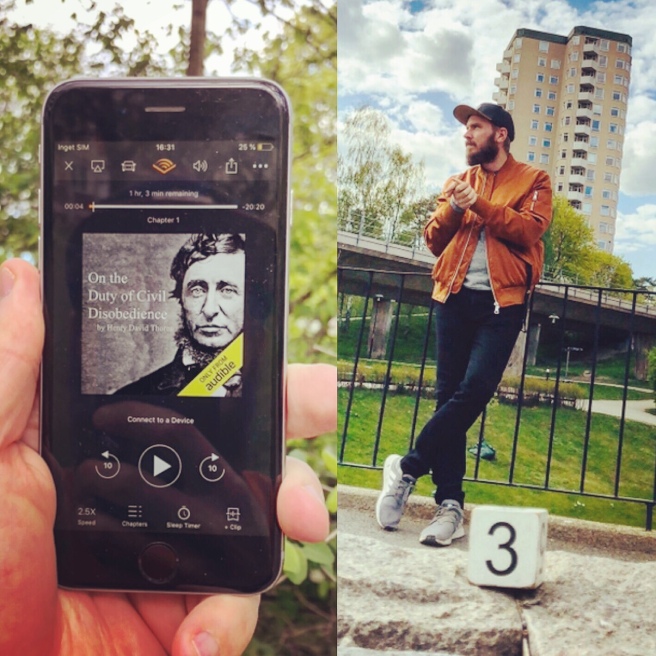 Thoreau was not only a occasional hermit and nature lover, but also had a word or two to say about the state and politics.

True patriots, according to Thoreau, is not the ones who blindly follows the administration but instead their own consciousness and the principle of reason. This went contrary to the then held belief the minority should shut up and respect administration the majority had selected.

📝 “We should be men first and subjects afterward.”

📝“The more money the less virtue” and “The best thing a man can do for his culture when he is rich is to endeavor to carry out those schemes which he entertained when he was poor”. I should remember this once the Benjamin’s start rolling in! 💵 😎

📝 “In an unjust society the only place for a virtuous man is in prison.” Thoreau spent one night in jail for not paying his to poll tax. He is quite proud of this. Almost childishly so. 😂

📝 “Anyone in a free society where the laws are unjust has an obligation to break the law.”

A quick and thought provoking read, but If you have limited time for Thoreau indulgence then you can skip this one and focus on Walden which is more of a timeless classic.

⭐️ Takeaway: A persons character should be determined by his\her actions rather words.

When did you take action for a cause instead of just talking?? 🤔

Find other fascinating books in my reading lists!

This short and sweet books became the next stop for my Hermann Hesse obsession.

The story has magical, almost mystical feel to it. Almost impossible to understand at times, but we are being warned, that the story about to be told about the journey to the East, is an untellable story. It’s not just a journey in space, but also in time. It’s is also both biographical and fictional.

The main character, H.H, loses touch with himself, his Being and his previously natural creativity. In an attempt to re-live past days of glory he sets out to write an account of his greatest adventure; his journey to the East with The League.

The League is a secret society that he ones where part of, with roots going back thousands of years. Famous members including both real and fictional hotshots like Plato, Mozart, Pythagoras, Don Quixote, Puss in Boots, and the ferryman Vasudeva (from Siddhartha) just to name a few.

”But no account of David (note: King David that is.) can prove to me that life is not just a game. That is just what life is when it’s beautiful and happy —- a game! Naturally, one can also do all kinds of other things with it, make a duty of it, or a battleground, or a prison, but that does not make it any prettier? Goodbye, pleased to have met you!”

It’s an honest and personal story about the cycle faith gained, lost and regained. The unending search for enlightenment.

It didn’t grab me right away but when I got into it I couldn’t put it down before I reached the last page. Beautiful book!

What should be my next Hesse book? 🤔Btw. Just ordered The Stranger by Camus. So expect more classic fiction going forward! 😊

The story revolves around young Sinclair and the difficult task of finding ones self. Growing up in a protected and pious middle class home he eventually has to face the real world. Sinclair gets a new mysterious classmates, Demian, who guides him to detach and revolt from the superficial world of form and awaken to his true self.

📝 Abraxas: A deity combining the godlike and the devilish.

📝 “All I really wanted was to try and live the life that was spontaneously welling up within me. Why was that so very difficult?”

📝 “When we hate a person, what we hate in his image is something inside ourselves. Whatever isn’t inside us can’t excite us.”

About the previous quote: If that’s the case – and by observing this phenomenon for a while I believe there is some truth to it – then even when someone irritates us, we can use that as an opportunity to learn more I out ourselves. I kinda like that quote for that reason.

📊 My Amateur Jungian Analysis: Sinclair is the “Ego”, Kromer his “Shadow” and Demian the “Self”. Lady Eve is the “Anima” (the unconscious feminine side of a man). One of Jungs anima levels is even named “Eve”. By opening up to Lady Eve, Sinclair becomes complete. He and Damien become one.

This a mysterious and short (100 pages!) coming of age story for philosophically minded reader. Pauses for contemplation are needed between each chapters. The best 3$ spent this year!

For those who read already: What do you think Demian did to get Kromer of Sinclair’s back?

I picked up Hermann Hesse’s “Demian” and believed it could act as a pallet cleanser after my binge-reading of books revolving around jungian psychology.

Haha, bad call! Already in the introduction I read that before writing the book in 1920 “Hesse began to explore the writings of Freud and Jung on dreams and archetypes”. Something that apparently influenced his writing to a large extent! 😂

Was this synchronicity (or a meaningful coincidence) at play, to use a concept introduced by Carl Jung? 🤔

I failed in my mission to move away from Jung, but the book started off so strong that I couldn’t put it aside. Now it is finished and a review is on it’s way! 👌🏻

“When we hate a person, what we hate in his image is something inside ourselves. Whatever isn’t inside us can’t excite us.”

Sometimes there are books that keeps getting referenced again and again in book I read. Silent spring is one of them. ——————————————

Being the book that kicked off the American environmental movement, I thought it would be interesting to see what it was all about.

Rachel Carson describes the damage being done to plants and wildlife by using chemical pesticides like DDT. She shows how nature has checks and balances and when they are being disrupted, consequences are often unexpected and unwanted.

The book was published in 1962 and a lot of the issues raised in “Silent springs” have been addressed or are being taken very seriously in today’s world. Readers today should look at this as a history piece rather than a way to learn about pressing environmental issues. ——————————————

It reads beautifully, like horror story with a touch of poetry. But I think you will get by just with knowing about the book and not necessarily having to read it. The reason is that most content is outdated and there’s probably more value in spending your time learning about contemporary issues elsewhere. But I can see how this book really stirred up feelings back in the day! ————————————————

“Silent Spring altered the balance of power in the world. No one since would be able to sell pollution as the necessary underside of progress so easily or uncritically.”

Naturalist Sir David Attenborough has stated that Silent Spring was probably the book that had changed the scientific world the most, after the Origin of Species by Charles Darwin.

“Nature has introduced great variety into the landscape, but man has displayed a passion for simplifying it. Thus he undoes the built-in checks and balances by which nature holds the species within bounds.”

What books do you see referenced everywhere and you feel you need to read?