My review could only cover a few of my notes from Lost Connections by Johann Hari. Here is the full set: 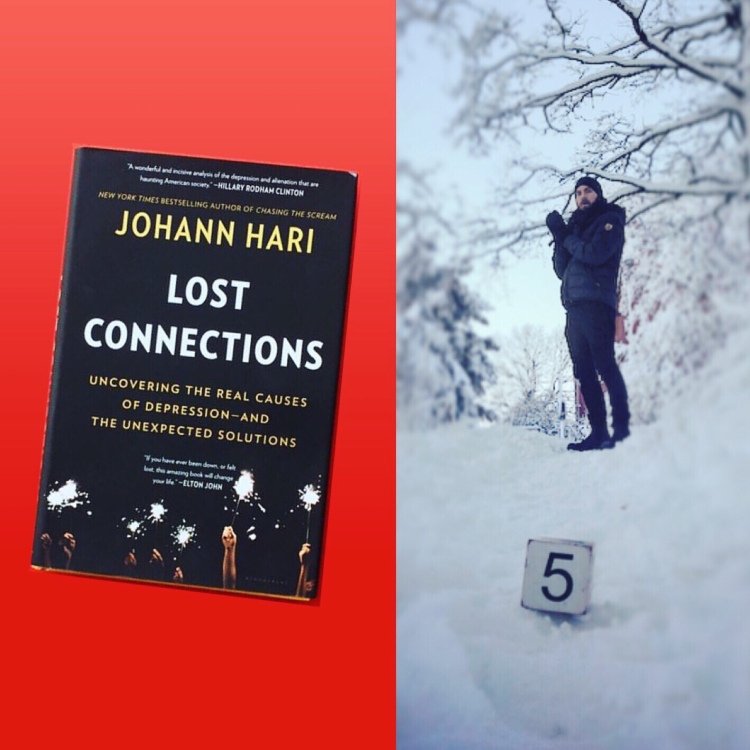 “You need your nausea, it is a message, it will tell us what’s wrong with you”.

Back then the answer was that depression was a malfunction in the brain. Lack of serotonin.

Side effect: you getting fat and sweaty.

Back in his youth. His family was unusual because they took pills. Nowadays everyone does it!

Björn comment: I was for the first time, since I was 15, chemically naked this year. Having quit both caffein and nicotine.

Depression and anxiety is very similar and often overlap.

Unhappiness and depression is not the same thing. Don’t say “cheer up!”

“If you expect it to work, for many of us, it will work”

The placebo effect could help almost any medical issue to some degree.

Publication bias: companies (who often finance studies) only publish the papers that make their product look good. Just like when you take selfies, you take several of them and discard all the ones with double chins and post the one where you look ace!

Effects of antidepressants are questionable but the side effects are real!

The drugs he evangelized as a teen wasn’t working and the company was later sued.

There is not much proof that low serotonin levels. Or if serotonin has anything to do with it.

Most popular book about anti depressants: “Listening to Prozac”.

Grief and depression has the same symptoms. Therefor, for a long time there was something called the “Grief exception” when it comes to diagnosing depression. But the time span for that exception has been made shorter and shorter and now it’s non existent.

Studies show that depression is in fact to a significant degree a problem not with your brain but with you you life.

Long term stress and bad events cause depression. Especially a combination of the two.

Depression has three types of cause: biological, social and psychological, this is known as the biopsychosocial- model.

Gallup 2011-2012: 13 percent is engaged in their work. 63 not engaged: Sleepwalking through the day. 23 percent are actively disengaged: busy acting out their unhappiness. Undermine their engaged colleagues.

The higher you are in the herachy the less likely you are to be depressed.

Disempowerment is at the heart of poor health.

2. Disconnection from other people.

Loneliness cause you cholesterol levels to sore.

Obesity and loneliness are as deadly.

The lonely people are also Anxious , pessimistic , low self esteem and afraid other people will dislike them.

Björns comment: this is what we are doing to our old people…

As hunter gatherers we only made sense as a group.

In a survey: nowadays it’s more common to have zero friends than any other option.

Being lonely and feeling lonely are not the same thing. Feeling lonely is the problem. You need to connect mutually. “It’s the sense that you are not sharing anything that matters with anyone else”.

Anxious and depressed people are prone to internet and gaming addiction. Escaping depression through distraction.

The more people value things, the more likely they are to be depressed.

Benefits of being obese:

3. Reduce people’s expectations of you. You become invisible to humanity is some sense.

Being treated cruel by your parents is the biggest driver of depression out of all childhood traumas.

5. Disconnection from status and respect.

Stress levels are high when ones Status is threatened or low.

The author References the work by Robert Sapolsky.

Even out hierarchies might be a good idea. Today’s world is more unequal than ever.

6. Disconnection from the natural world.

Moving is natural to us. That’s why exercise makes us happy.

Spending time in nature is good for us. We can concentrate better.

7. Disconnection from a hopeful and secure future.

A larger framework for of significance.

Depressed people don’t have a sense of the future. They have a loss of future.

Insecure work create insecure people. 1 day contracts or no contract.. gig economy, not too glamorous for everyone.

Neuroplasticity : the brain changes depending how you use it. It’s the tendency for the brain to restructure itself after experience.

Genetics plays a role, but is not staring the show.

The caviat is that genes linked to depression can be triggered by certain environments. Your gene makes you more vulnerable but they don’t control your destiny.

Instead of diagnosing depression – diagnose disconnection?

Rumspringer: Amish 16 year olds spend ~2 years in regular society not needing to follow Amish rules. 80 percent come back. Coming back is voluntary, therefore Amish is not considered a cult.

Reconnect by voluntary programs and clubs.

Bjorns comment: For me it was toastmasters. Different people, common goal.

But depressed people cant do it on their own. It has to be prescribed. Someone need to help them get there. The depressed person just won’t do it by their own.

Top down organizations make the people low in the hierarchy depressed. They feel like cogs in the wheels and without control or influence.

Kids crave stuff… it hurts not to get them.

Björn comment: I dislike some of the solutions. It takes a stand that we are victims of advertisement etc.. well, kids might be. But should adults be able to handle that?

Envy and scarcity- another cause of depression.

Meditation can be very beneficial to combat depression.

80 percent that was given the big dose of LSD said to have better relationships, more compassionate and more positive attitudes about themselves and about life. Just like people that meditate a lot!

Researcher gave psychedelic drugs to people that had struggled to quit smoking. 80% where smoke free 6 months after the test.

What does the psycadelics and feel meditation have in common:

“They both break our addiction to ourself”

Smoking becomes quite petty in the perspective of the whole.

Being free from the ego, for 25% of the testers, was terrifying!

“To people who feel safe only behind walls, dismantling them won’t feel like a jailbreak, it will feel like an invasion”

Experiments: doctors where asked to acknowledge a patients childhood trauma, with compassion, and listen without judgement if the patient wanted to talk about it.

This made a huge difference! Reduced shame. “A secular version of confession”

Shame makes you sick. Sealing of a part of yourself and thinking it’s disgusting is toxic to life

The poorer you are the more likely you are to become depressed and anxious. and to become sick.

People have a secure future, companies need to incentivize people more to work with benefits etc. people felt like they had a choice.

What?! Just give out money?

ADHD was much lower because people spend more time connecting to their kids.

We can leave deadening jobs under universal basic income.

“The weekend” was mocked as an utopian idea when labour unions started to fight for it!

Having fulfilling work is seen as a freak strike of luck, like winning the lottery.

“You are not a machine with broken parts you are an animal whose need have not been met.”

That’s it! Sounds cool? If you want more you can get the book right here! Also, don’t forget to check out more great reads at in my book lists.

One thought on “Raw and Unedited Notes from “Lost Connections””